A former soldier has created an award-winning broadband business after discovering he had stronger Wi-Fi connection in The Falklands than in the UK.

PJ Farr was serving in The Falkland Islands n 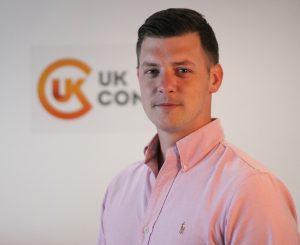 ear Antarctica when he took a selfie with a penguin and sent it to his father-in-law on his mobile phone.

The former infantryman from the Princess of Wales’s Royal Regiment could not understand why he got a clear signal in remote environments but struggled to get a connection back at home in Guildford.

Using the skills of curiosity and discipline that he had developed as a soldier, PJ decided to find a solution to the problem when he returned to the UK in 2013.

The answer was UK Connect, a broadband business for the UK housebuilding industry, that PJ set up with the help of mentoring and an £18,000 loan from the Start Up Loans programme, part of the Government-backed British Business Bank.

Six years later, the business, based in Guildford, Surrey, has an annual turnover in the millions and a client list which includes some of the biggest names in the UK construction industry, including Barratt Homes, Taylor Wimpey and CALA Homes.

The business is rapidly expanding, with its turnover doubling year-on-year, and PJ has big ambitions for the company.

In April 2019, the business was named Scale Up Business of the Year at the 2019 Soldiering On Awards part of X-Forces, the leading organisation in the UK for enterprise in the military community.

PJ secured the funding from the Start Up Loans programme with the help of X-Forces, which enables forces veterans to enter the world of business.

X-Forces has supported loans of £14 million to 1,427 British start-ups through the Start Up Loans Programme since 2012. Loans they support have one of highest success rates for micro-financing across the programme, with 93% of businesses paying off their debts.

PJ Farr is among the thousands of business owners in the South East who has received funding from Start Up Loans to set up a business. New figures from the Government backed scheme show that it has lent £500m to small businesses since 2012 – of which £47.6m went to the South East, with the average loan worth £8,380.

PJ Farr, the founder of UK Connect, said: “UK Connect is a challenger brand that wants to show how the housebuilding industry can improve productivity through the use of technology. With partners such as the London Stock Exchange and Cisco helping us develop new strategies and solutions, we are at an incredibly exciting juncture.

“I saw a gap in the market and used the discipline and focus that I had learned as a soldier to find a solution to the problem. While I had some savings, I needed extra funding, and that’s where Start Up Loans and X-Forces Enterprise came in. Their support was invaluable, and I wouldn’t be where I am today without them.”

Richard Bearman, Managing Director at Start Up Loans, said: “We are proud to support new business owners like PJ Farr and it’s fantastic to see what he’s achieved in a short space of time. Our X-Forces Enterprise network provides former military personnel like PJ with tailored and specialist support, which helps to connect veterans to business opportunities.

“Since 2012, we have administered £14 million of Start Up Loans funding to over 1,400 new ex-military business owners and we’re looking forward to continue providing this support.”