Starting your own business can be a nerve wracking prospect. For many, the decision to go it alone poses a number of difficult questions – Will I have to leave my job? How will I afford to support my family? What if my business fails?

Our British Business Dreamers survey* revealed that the fear of failure is one of the main triggers preventing ambitious individuals from realising their dream of being their own boss.

The survey also found that only a fraction of people who have ambitions of starting their own business actually go through with their plans. 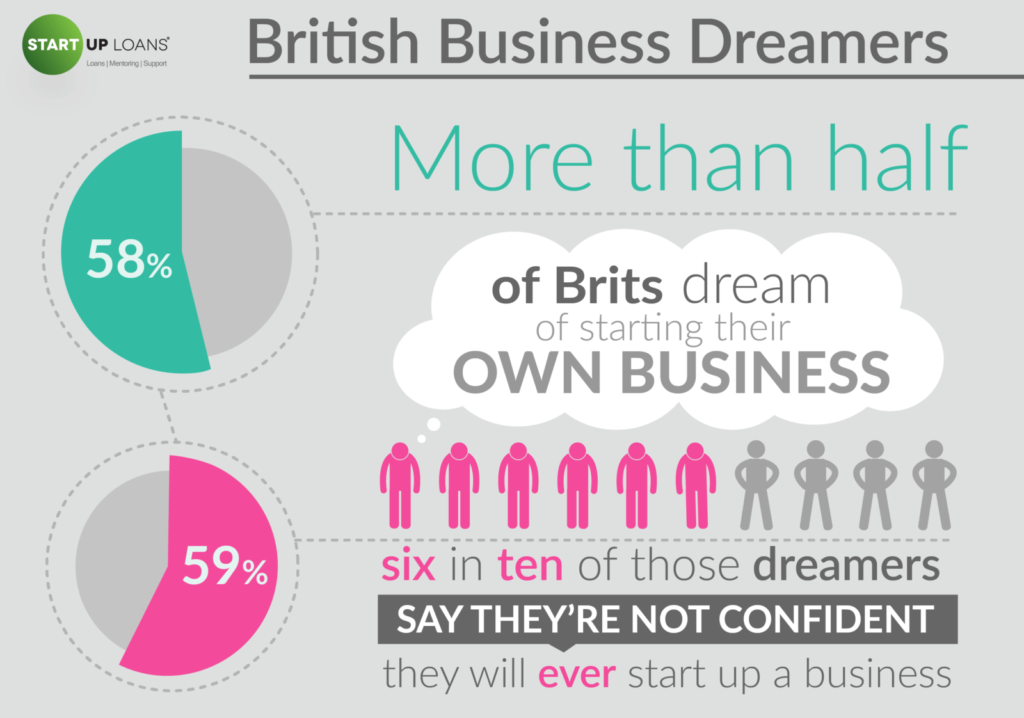 Over half of the Brits that we questioned said they’d like to start their own company. They are in fact business dreamers. However, despite the nation’s surge in ambition, six in 10 of those fear that their self-employment ambitions will only ever be a dream.

Financial worries and the pressure of family commitments were the other triggers identified by our panel of would-be businessmen and women.

We’ve compiled a list of key findings from our study, along with case studies and advice to dispel some of the start up business myths and misconceptions.

There’s no doubt that a greater amount of help and support is available for small and new businesses, so there’s a lot more scope to make the most of a business opportunity. 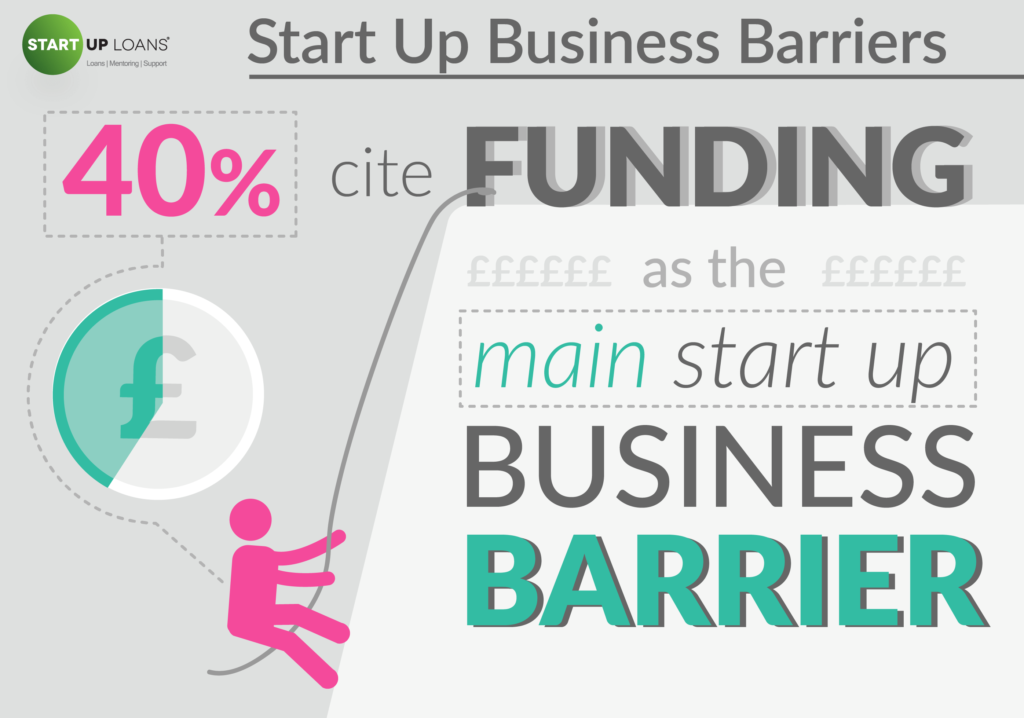 But despite the numerous business funding options available 40% of people we spoke to still cite money worries as their primary reason for not going it alone.

As for choosing to leave work, 10% say leaving their full-time employment security blanket behind would prevent them from trying to start a company.

The Start Up Loans Company is looking to change this with our government backed loan scheme for new businesses.

Find out more about the Start Up Loans scheme.

Does age and location deter Brits from starting a business?

The British Business Dreamers survey found age and location to be two of the many factors that can determine attitudes towards kick starting your own company.

The survey revealed that Brits living in the North East were twice as likely to worry about business funding than someone living in East Anglia.*

Are women braver than men when it comes to making the jump into self-employment?

Our British Business Dreamers survey looked at a number of areas within the UK demographic, including gender, to learn more about the nation’s attitudes toward business start ups. 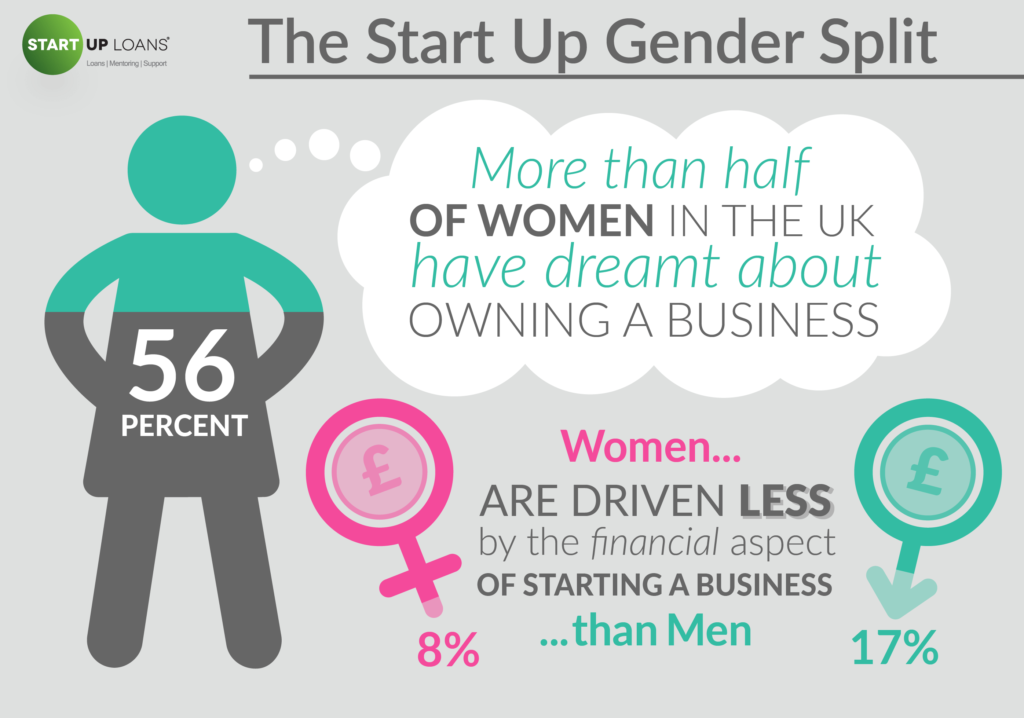 Over half of our female respondents revealed that they have dreamt about starting a business.

Interestingly, women (8%) reported to be less driven by the financial aspect of starting their own business than men (17%).

Neomi Bennett is just one of the many women out there who have made their dream a reality with the help of a Start Up Loan. Her Neo-Slip business manufactures and sells anti embolism stocking aids. Read more about her inspiring story.

For many parents, the cost of childcare and the pressures of balancing a career with family life have made becoming self-employment an attractive prospect. 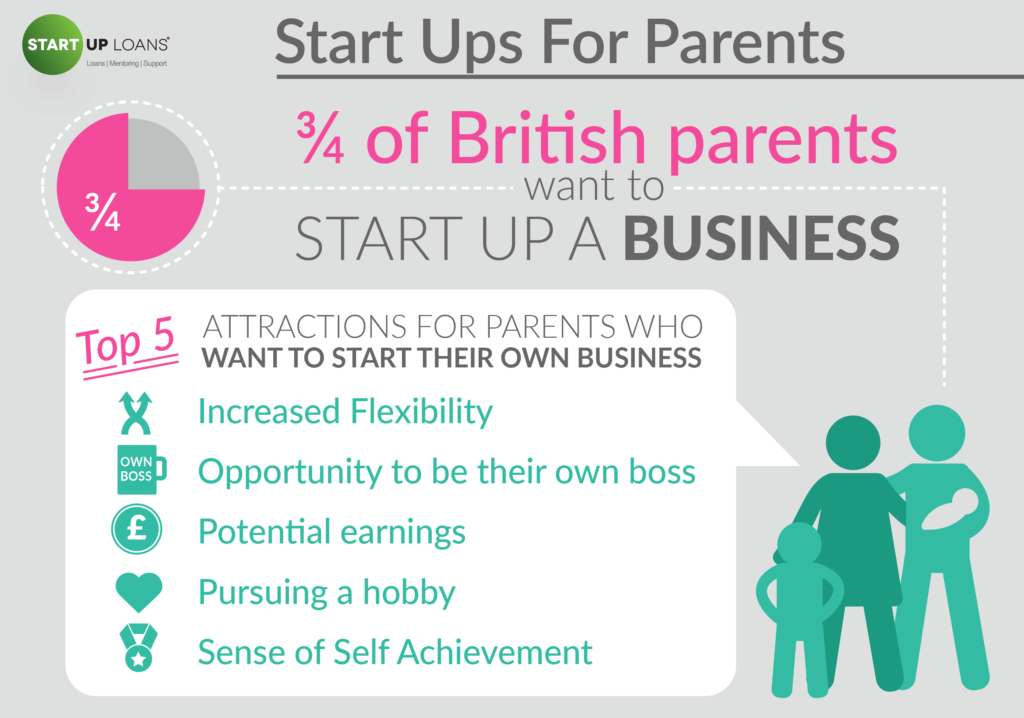 In fact, our findings show that three quarters of British parents wish to start up their own business with increased flexibility topping the list of triggers for doing so.

Gail Brown, a mother who founded her own gluten and wheat-free food company, is just one of the many parents to have benefitted from a Start Up Loan. 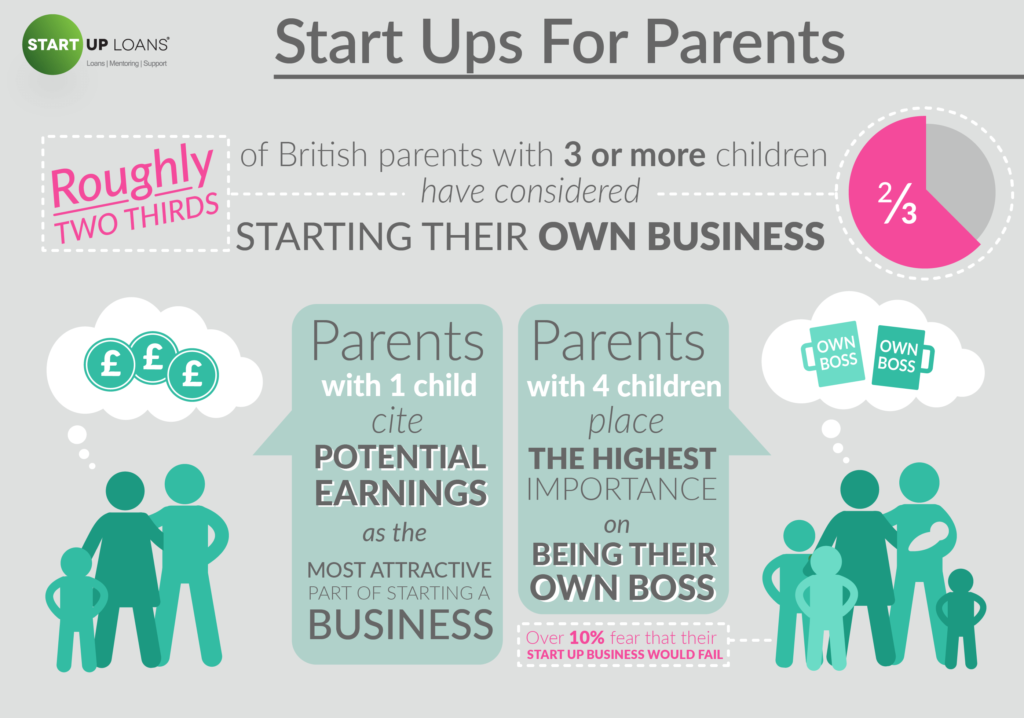 Our survey also found that number of children you have could vary your attitude towards going self-employed.

For instance, potential earnings attracted parents with one child, whereas working for yourself was featured highly on the list of priorities for parents with four kids.

For some businessmen and women, children have actually been the main inspiration to start a company.

That was the case with David O’Neal whose innovative children’s salon and barbers ShortCuts took off with the help of a Start Up Loan.

So, why start your own business? The perks of being your own boss

We’ve looked at a few examples of people who have already made the leap, as well as funding initiatives like the government-backed Start Up Loans scheme. But what are the main reasons for wanting to start a business in the first place? 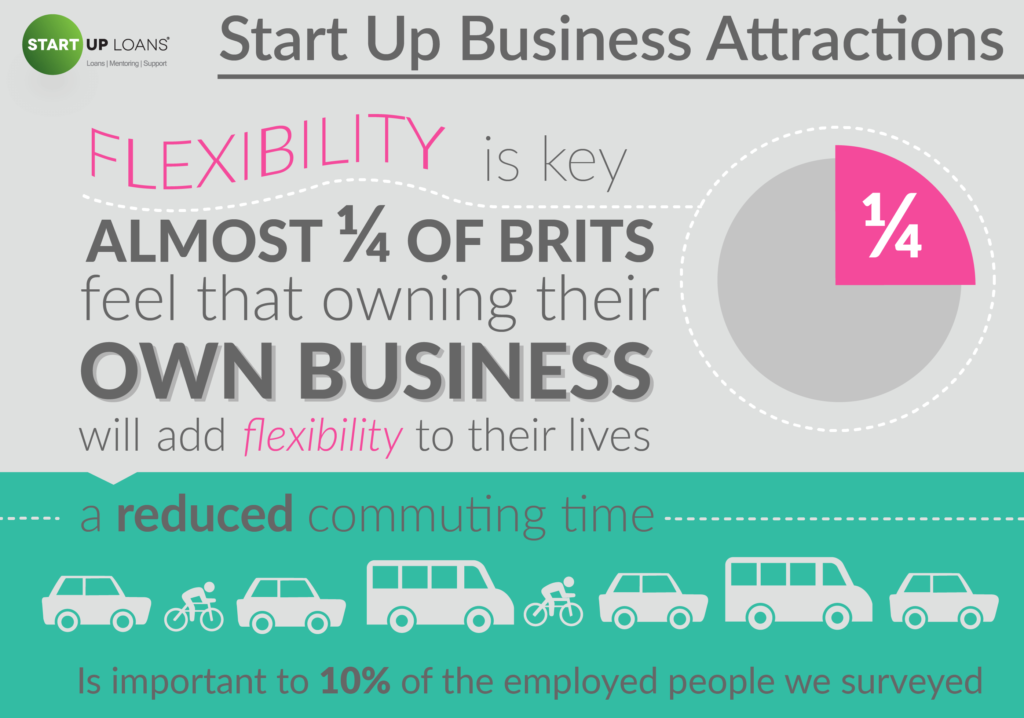 As you would expect, flexibility topped the list of the 10 most popular reasons for becoming self-employed.

Over a quarter of respondents to our survey said they felt owning their own business would free up more of their time. Added flexibility isn’t the only perk. Self-achievement and a reduced daily commute also ranked highly.

In numerical order, here are the ten most popular triggers for starting your own business:

1. Flexibility
2. Being your own boss
3. Potential earnings
4. A feeling of self-achievement
5. Wanting to pursue a hobby as a business
6. A reduced commute to work
7. Solving a problem
8. Having something to pass down
9. Self development
10. Having an alternative approach to what is out there already

From creative arts to food, the top 15 sectors for start up businesses

Half of the battle of going self-employed can be choosing a profitable business sector. Here are the 15 most popular business sectors, according to our survey:

And finally, what is Start Up Salary Success?

Working out how to start a company is one thing, knowing how much money is yours to take home is another.

At Start Up Loans, we offer mentoring and support to people from all backgrounds, including financial advice with business salaries and profit margins.

Choosing a business salary can be tricky. There are a number of questions that you need to ask yourself before choosing a figure. How much can you really live on? Do you have any outstanding personal debts or overheads? 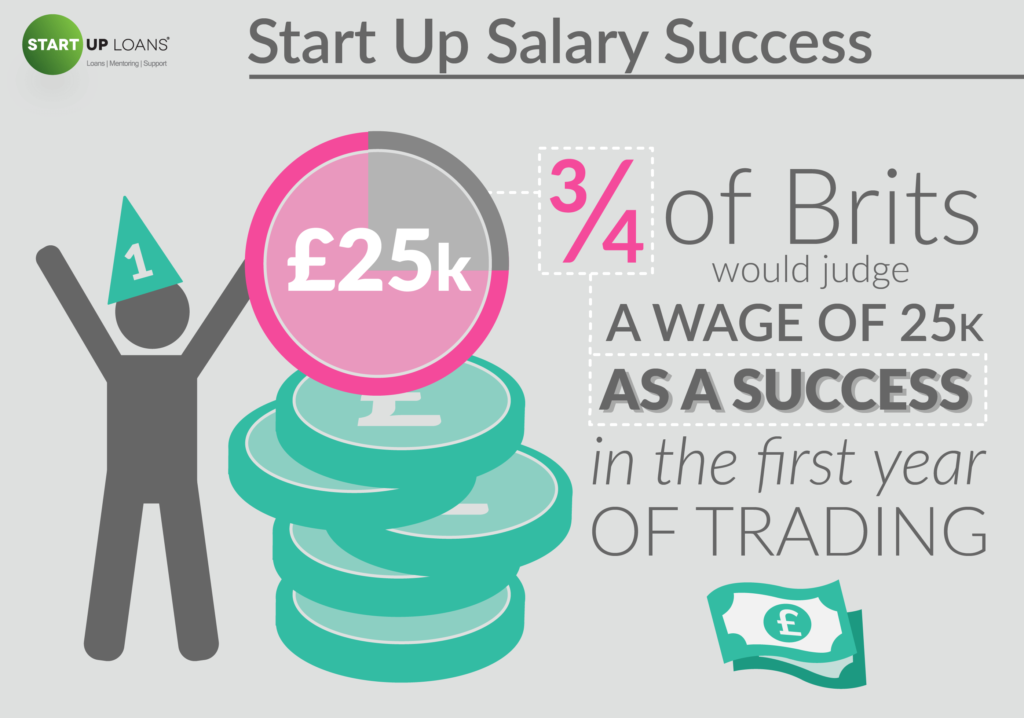 Have you worked out the figure you’d be happy with taking home in your first year of trading? You might be interested to hear that three quarters of Brits regard £25,000 to be a successful business salary in year one.

Britain’s average salary is estimated at £26,012, meaning a large number of those looking to start a business would potentially take a pay cut.

But that hasn’t stopped some of our most successful beneficiaries making the jump. For most, the increased flexibility, self-achievement and potential income have warranted the risk. To read about our many success stories, visit our success stories page.

If you’re just getting started on making your business dream a reality, why not check out our guide to preparing a business plan as a starting point?