Start Up Loans travelled across Britain on the Start Up Tour

The Prime Minister welcomed the StartUp Britain bus into Downing Street to launch a five week national tour to help boost the number of businesses started this year to a record 600,000.

At the launch, surrounded by entrepreneurs, David Cameron announced that the target set for the government-backed Start Up Loans company three years ago of awarding 30,000 loans to individuals by 2015 has been achieved. 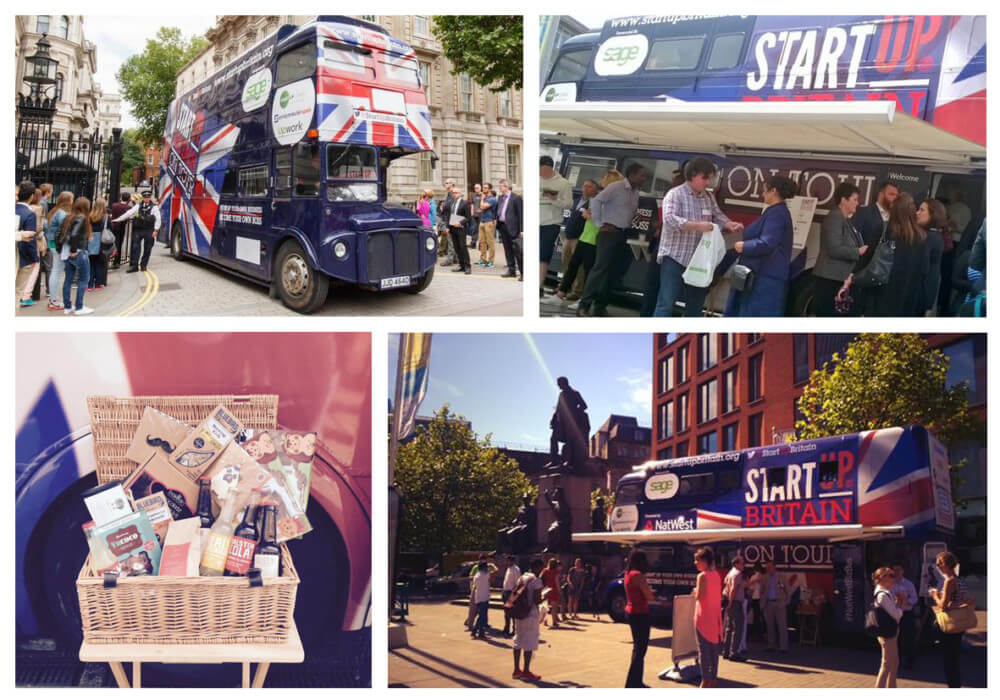 This is the fourth year that the StartUp Britain campaign will be touring the country with a bus full of start-up experts and champions, to provide inspiration and support to tens of thousands of aspiring entrepreneurs. The route takes in 25 locations across England, Scotland and Wales.

Joining leading small business software company Sage as a headline sponsor of the tour, RBS is providing its iconic 1966 Routemaster bus, the NatWest Mobile Business School, wrapping it with campaign branding to catch the eyes of passers-by on the high street and on the open road.

Government-backed Start Up Loans Company and Upwork – the world leader in online work – are also supporters. On board, the sponsors will be offering one-to-one advice and workshops to aspiring and early-stage entrepreneurs, while local business organisations and entrepreneurs will provide mentoring and local guidance. National partners include FSB, British Chambers of Commerce and UKTI, which recently launched the First Time Exporters Initiative to provide advice and support to help companies expand into international markets.

After stops in Canary Wharf and Spitalfields Market, the bus will be taking up prominent positions in Birmingham’s Centenary Square, Manchester’s Piccadilly Gardens and Briggate in Leeds, and will be visiting Margate, Plymouth, Dundee, Middlesbrough and Swansea, among many others.

“Since StartUp Britain launched in 2011 we have seen record breaking numbers of people each year starting businesses, showing that the entrepreneurial spirit within Britain continues to grow. By parking the StartUp Britain bus in town squares across the country, we want to give people the confidence and inspiration to turn their business ideas into reality.”

“We are looking forward to getting on the road and meeting aspiring business owners across the UK. We have already supported over 30,000 individuals, in every sector, to turn their business ambitions into reality. As a government funded scheme we not only offer finance but pre and post business support including free mentoring and accesses to exclusive business offers. Alongside members of the Start Up Loans team, on hand to give advice, some of our loan recipients will also be available to share their start up story.”